The AKC standard is slightly different to the European standard. It defines the height differently, allowing level-bite and almond-shaped eye, to just mention a few differences.

A graceful, lithe, well-balanced dog with no sign of coarseness, weakness or shelliness. In repose the expression is mild and gentle, not shy or nervous. Aroused, the dog is particularly alert and full of immense energy and courage. Noteworthy for endurance, Bedlingtons also gallop at great speed, as their body outline clearly shows.

Narrow, but deep and rounded. Shorter in skull and longer in jaw. Covered with a profuse topknot which is lighter than the color of the body, highest at the crown, and tapering gradually to just back of the nose. There must be no stop and the unbroken line from crown to nose end reveals a slender head without cheekiness or snipiness. Lips are black in the blue and blue and tans and brown in all other solid and bi-colors.

Almond-shaped, small, bright and well sunk with no tendency to tear or water. Set is oblique and fairly high on the head. Blues have dark eyes; blues and tans, less dark with amber lights; sandies, sandies and tans, light hazel; livers, livers and tans, slightly darker. Eye rims are black in the blue and blue and tans, and brown in all other solid and bi-colors.

Triangular with rounded tips. Set on low and hanging flat to the cheek in front with a slight projection at the base. Point of greatest width approximately 3 inches. Ear tips reach the corners of the mouth. Thin and velvety in texture, covered with fine hair forming a small silky tassel at the tip.

Long and tapering. Strong muzzle well filled up with bone beneath the eye. Close-fitting lips, no flews.

Large, strong and white. Level or scissors bite. Lower canines clasp the outer surface of the upper gum just in front of the upper canines. Upper premolars and molars lie outside those of the lower jaw.

Long, tapering neck with no throatiness, deep at the base and rising well up from the shoulders which are flat and sloping with no excessive musculature. The head is carried high. 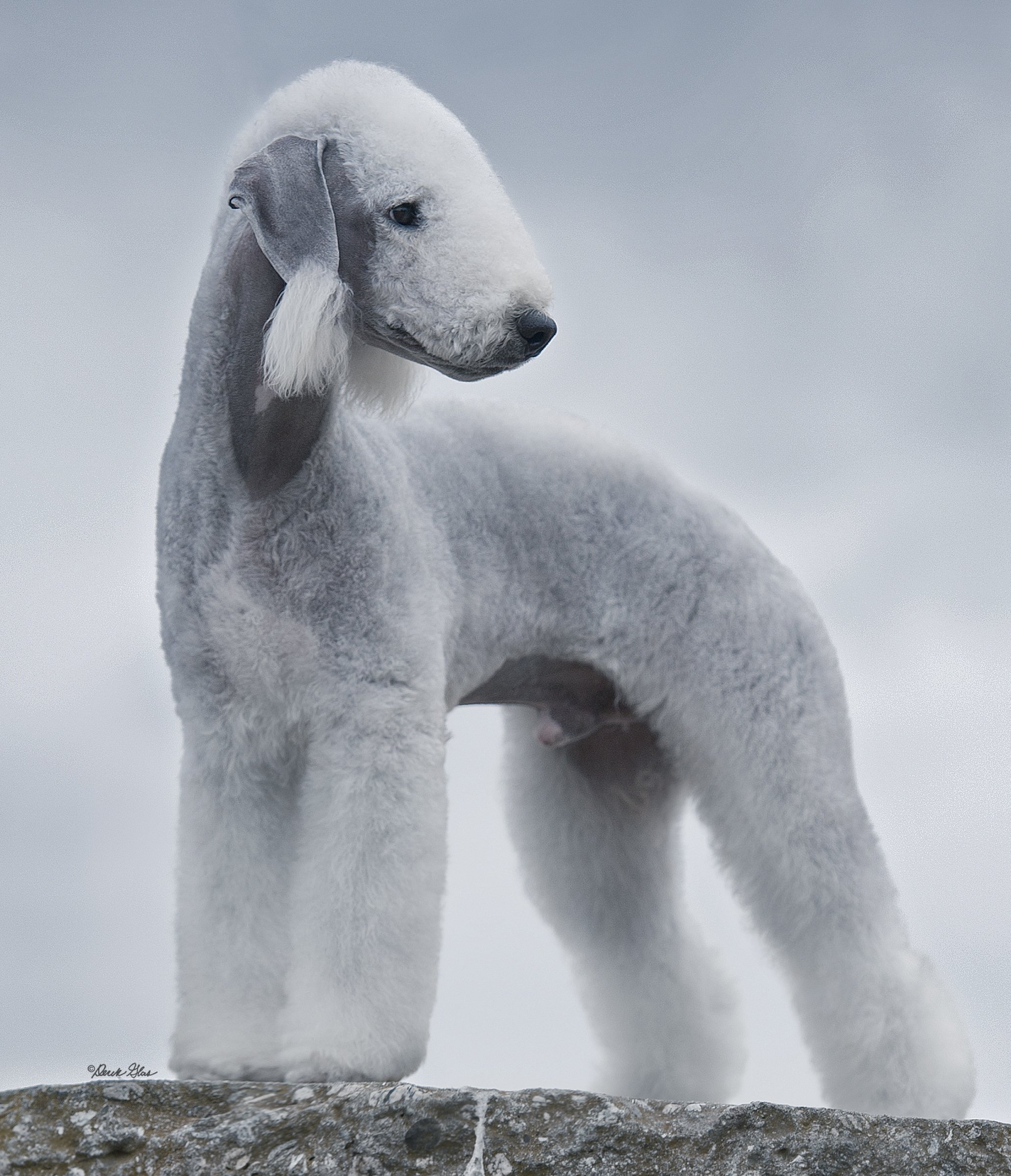 Blue, sandy, liver, blue and tan, sandy and tan, liver and tan. In bi-colors the tan markings are found on the legs, chest, under the tail, inside the hindquarters and over each eye. The topknots of all adults should be lighter than the body color. Patches of darker hair from an injury are not objectionable, as these are only temporary. Darker body pigmentation of all colors is to be encouraged.

Muscular and markedly flexible. Chest deep. Flat-ribbed and deep through the brisket, which reaches to the elbows. Back has a good natural arch over the loin, creating a definite tuckup of the underline. Body slightly greater in length than height. Well-muscled quarters are also fine and graceful.

Lithe and muscular. The hind legs are longer than the forelegs, which are straight and wider apart at the chest than at the feet. Slight bend to pasterns which are long and sloping without weakness. Stifles well angulated. Hocks strong and well let down, turning neither in nor out. Long hare feet with thick, well-closed-up, smooth pads. Dewclaws should be removed.

A very distinctive mixture of hard and soft hair standing well out from the skin. Crisp to the touch but not wiry, having a tendency to curl, especially on the head and face. When in show trim must not exceed 1 inch on body; hair on legs is slightly longer

Set low, scimitar-shaped, thick at the root and tapering to a point which reaches the hock. Not carried over the back or tight to the underbody.

The preferred Bedlington Terrier dog measures 16½ inches at the withers, the bitch 15½ inches. Under 16 inches or over 17½ inches for dogs and under 15 inches or over 16½ inches for bitches are serious faults. Only where comparative superiority of a specimen outside these ranges clearly justifies it, should greater latitude be taken.

To be proportionate to height within the range of 17 to 23 pounds.

Unique lightness of movement. Springy in the slower paces, not stilted or hackneyed. Must not cross, weave or paddle.